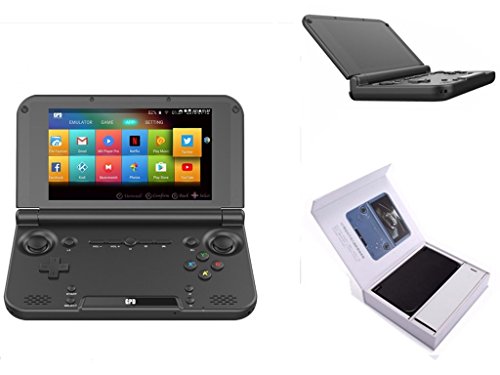 The GPD XD DroidBOX PlayOn Gamepad is a small android gaming device that looks similar to a tiny laptop of a Nintendo DS, but with only one screen. You can use the DroidBox to play games on and stream videos with Netflix, Kodi, or other streaming sites.

The number one great thing about the DroidBOX PlayOn Game Pad is that you can play almost any game made by any company. You can play these different games using something called an emulator.

An emulator is a software that is downloaded onto the DroidBOX that allows the device to act as a different gaming device. With the Reicast Emulator you can play any Dreamcast game, such as sonic.

Owning a DroidBOX is comparable to owning all the handheld gaming devices, but in one compactible unit.

As far as the hardware in and on the device, it compares up to most other handheld devices. With two analog sticks, a directional button pad, and the action buttons, plus a start and select menu button. The controls on the DroidBOX is compatible to play games from many different devices.

There is an HDMI output on the back of the unit allowing you to display your game on a monitor or TV screen. Plus, this device has a battery life of about 5-8 hours, depending on what you are using the device for, for example streaming movies can kill the battery faster than normal game play.

If you are a gamer that prefers the classic games from the 80s and 90s this device is for you. While there are some modern exceptions from the PSP emulator, most the games available on the DroidBOX are classic games, such as Sonic, MarioKart, Street Fighter 3, ext.

With that being said, this gaming device is also great for streaming videos from Netflix or Kodi, since Kodi is predownloaded onto this device to begin with.

With dual analog sticks, directional key pads, and X, Y, A, B action buttons, the DroidBOX is compatible for many different games, from different processors. Most of the emulators to play games on are free and easy to download with the Wi-Fi accessibility.

And you can use this device to log onto social media sites via their apps such as skype, Facebook, or Twitter, plus browse the web with the web browser. If the small screen located on the DroidBOX is too small there is a HDMI port allowing you to hook up this gaming device to a larger monitor or screen.

On the other side of the argument, the DroidBOX PlayOn Game Pad is lesser known, so there are less games available for playing on it. If you are into modern shooter/fighting games, this is not the device to buy.

While using the PSP emulator or if you are streaming videos your battery will drain quickly because it is pushing its hardware to the max. But while using the simpler emulators your battery is guaranteed to last anywhere between 5-8 hours of game play.