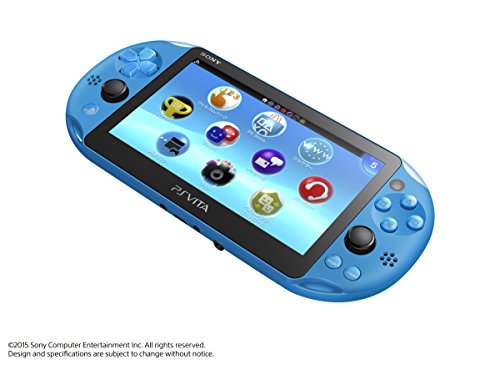 A child who grew up in the 90s era is familiar with the brand name Sony. Sony is the sole companion of many children and even grown-ups due to their awe-inspiring gaming console series, ‘The PlayStation.’

By the end of the year 2013, they launched an updated version of the PlayStation Portable and renamed the console as PlayStation Vita. Since then the device has been winning hearts on a whole new level.

In terms of hardware, one can compare the Vita with that of the Swiss army knife. The plethora of in-built gadgets and technology packed into the console is capable of satisfying the requirements of any hardcore gamer. The specifications and features of the gadget are discussed in detail below.

The overall physical aspects of the console are available in two versions on is the slim, the other is the lite. Its front profile of the console is dominated by a massive 5-inch screen having analog controls on both the sides of the device, in the form of the face keys on its right and D-pad on the other side.

This is the layout that is unnatural and to some extent uncomfortable to some, who are familiar with Sony’s dual shock 3 series of controllers.

The visible buttons on the device all work really well, there would be some initial doubts in the mind of a hardcore gamer in terms of accuracy while shooting in game titles like The Golden Abyss.

However, if you go on playing other FPS titles, that doesn’t pose such a big problem due to the performance the controls provides to the gamer similar to that of the full-scale controller.

The bonus hardware features such as the capacitive, multi-touch ready front display that is responsive and offers an immersive gameplay. Game titles like Uncharted and other related titles exclusively tailored for the PlayStation Vita consoles, make use of all the hardware and functions available to the creator’s disposal.

Now to shed some light on the rear touchpad the device is equipped with, it is really convenient to move characters in titles like Little Deviants given that you are used to using the same while gaming. The added feature like tilt controls is not exactly brand new in terms of concept yet it comes handy in certain gaming conditions.

The onboard dual cameras with their 0.3 megapixel capacity are not made for professional photography and especially not for low light photography. They are included in the finished device to assist in the Augmented Reality feature of PS Vita devices.

Moreover, Sony’s basic efforts for making an AR gaming work are well, bite-sized pieces of silly fun. Game titles like Reality Fighters, makes use of the cameras and the Augmented Reality software and digitizes your face and paste the same on the characters! This is surely a starter for your gaming appetite, yet it is indeed a lot of fun.

The audio output and connectivity

The game titles for PS Vita would be available on micro-SD card cartridges which the user can slide in the slot made available at the top. All your media transfers, songs, and pictures will be stored in a micro-SD card sized memory card that is exclusive to Sony PS Vita devices. This is inserted in the covered slot at its bottom.

The USB cable used for connecting the device to the PC or to that of a PS 3 is nonstandard and can pose a problem while looking for spares. The overall audio output from the speakers of the device is not at all satisfactory if you are an audiophile, but is okay for the ones who are interested in the game!

Apart from the awesome performance the Vita delivers in terms of gaming, it’s wide range of pre-installed apps helps in enabling the device to focus on playback of media playback and other related communications.

The operational tutorials and the introduction of the augmented reality feature in the Vita are handled solely by an app, pre-installed in the device that makes the user familiar with the features available. This ensures a smooth gaming experience.

Media playback via the PlayStation Vita is seamless as the device supports all the major formats such as JPEG, TIFF, and PNG. The users can also enjoy their music as mp3 and AAC file formats are supported by the media player of the device.

The support faces some limitations in the playback of movies as the only MPEG-4 format of files are supported by the device which is actually a downside.

How does the product serve your needs?

This is a handheld device, yes that is clear. There are other options like the Nintendo 3DS that is inexpensive when compared to that of the PS Vita, that is true but does the competing products stand a chance against the legacy the PlayStation series of portable gaming consoles holds both in terms of hardware and performance?

No! The capacitive touchscreen, high performing graphics handling hardware, and advanced control all adds up to the appeal of this product over the competing ones especially if you are a hardcore gamer!

How is the product different from that of its competitors?

Competing products like that of the Nintendo Game Boy Advance, Nintendo 3DS etc have the advantage over Sony PS Vita in terms of both the battery backup and price.

But they seriously lack the punch that is the major requirement of the modern day gaming communities and the individual gamers. If you are looking for a powerful and advanced hand-held gaming console, the PlayStation Vita won’t disappoint you.

The impressive performance of the Vita, coupled with its advanced controls and Augmented Reality feature, is surely a Unique Selling Point that appeals to the tech-savvy masses.

To play some of the best selling gaming titles in the best possible resolution and immersive gameplay that comes close to the gaming consoles and gaming PCs, the PlayStation Vita is the go to device for all your portable gaming needs.