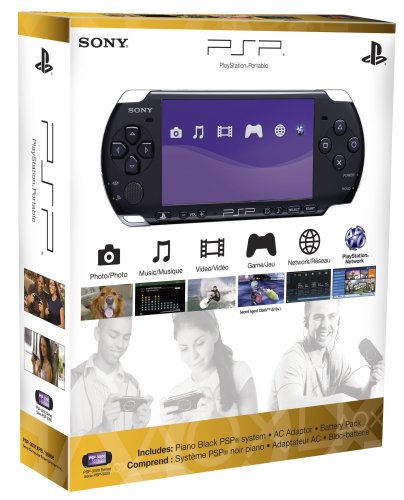 After having one of the most desired gaming systems on the market, the PlayStation 2, Sony decided to release a new handheld gaming device called the PlayStation Portable, to compete with the Nintendo Game Boy Advance and DS.

Comparable to the PlayStation 2, this handheld gaming device has everything you need to take gaming on-the-go.  The PSP can do more than play games too, because of its removable memory cards and Wi-Fi capabilities you can stream music, watch videos, use an internet browser to surf the web and store photos.

The design of this gaming device is similar to the PlayStation controller. With the same action keys; square, triangle, circle and x, the directional keypad buttons, and an analog stick, and two (instead of four) shoulder buttons.

While the PSP does sport an analog stick, it is a little bit different than the ones that you would find on a controller. The analog stick on the PSP does not protrude out from the controller, instead it is only raised an unnoticeable amount, but enough to have the feel of the familiar analog joystick found on the PlayStation 2 controllers.

Another similar feature to the PlayStation is the gaming discs. But don’t get confused and think these discs are as large as PlayStation 2 discs, instead they are little tiny discs that are compacted with all the gaming that you could ever want. And if that isn’t enough, you can even buy little discs with licensed movies.

At the bottom of the PSP they have designed an audio jack, which comes in handy because the speaker system that is in the PSP is not very loud.

Sony claims that while the PSP is a gaming device, it is also a portable entertainment device that you can do relatively anything on.

With Wi-Fi capabilities, you are able to use the browser and get on most websites, especially since the PSP already comes with JavaScript and Flash installed on it, but you may need to update to the most current version of both of these.

The 2.0 upgrade on the PSP allows you to remain connected to multiple networks so you don’t have to reconnect to them each time you enter a familiar Wi-Fi network.

With the rise in technology since 2005, when the PSP first came out, it is safe to say that there are more technologically advanced portable gaming devices currently on the market. But for being made over ten years ago the PSP still holds up to Sony’s high standards of portable gaming.

If you are looking for a handheld device that will allow you to play classic PlayStation games, the PlayStation Portable is the device to buy.

Only a slight bit smaller than the PlayStation Vita, with a 4.3 inch LCD display, the PSP has everything you need to play games without all the distractions. Because the initial size of the memory on the PSP is so small, the PSP is best for only storing about one game on.

If you are looking for something that includes all the bells and whistles, you should shoot for a more upgraded handheld gaming device that has a lot more memory and RAM.