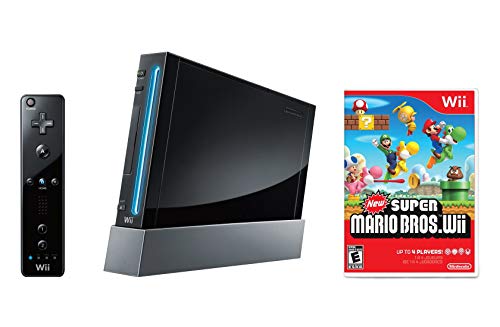 Video games have always been associated with having a sedentary lifestyle. This is because the very nature of video games would most definitely require you to do nothing but sit down and fiddle with the controls.

While this is the most typical setup for video game players, there have been technological advancements springing up lately that would allow them to move around a bit more whenever they play.

One of these technologies employs the use of motion sensors. The most popular console in the market nowadays when it comes to this is the Nintendo Wii Console Black with Wii Sports and Wii Sports Resort.

This purchase of the Nintendo Wii Console comes with the Remote Jacket, Sensor Bar, Nunchuk, Adapter, Wii Sports and Sports Resort CD, and most importantly, the Wii Remote Plus controller, all of which are specially created for the Wii brand. This particular bundle would make you not want to look for any other console, as all of the necessary accessories are well in the package.

The Wii MotionPlus takes video gaming to a whole new dimension. Instead of merely sitting down while playing, the Wii MotionPlus is the mechanism that allows you to get up and move. With this Wii Console Package, you could experience the Wii MotionPlus, thanks to the Wii Sports Resort that comes with the package.

The earlier models of the Wii used to be made with a white plastic exterior. With this version of Wii however, it stands out thanks to the black color of the covering. This adds style to the console, and overall is a great addition to any living room.

If you wish to move on from your old consoles, but donot want to say goodbye to your games, then the Wii is perfect as it is equipped with a backward compatibility for the Nintendo GameCube. Having said that, you could play with your favorite classics you used to play with on the GameCube smoothly on the Wii.

Who would’ve thought that you could play video games apart from just sitting down? With the Wii MotionPlus, as well as the sensor bar and remote, your control and means for the game to be playedwould be more interactive and would entail moving your body much more. This would allow you to prevent being too sedentary when it comes to playing games and thus helps to promote a lifestyle that’s a lot healthier.

If you’re playing with the Wii on an HD-capable TV Set, then expect the cables to not adapt well to your television sets, as the output has a smudgy, hazy kind of reception that lacks vibrancy regarding color, as well as giving significantly less clarity. Having said that, those who are bothered by this would most definitely want to avail of other cables that would be able to help provide a clearer reception.

The controllers make use of traditional batteries that are to be removed and replaced the moment it’s drained of power. One of the disadvantages of this is that the batteries could pretty much run out of charge in unexpected hours, and you’d have to worry about removing them now and then. Buying and making use of rechargeable batteries are a good, cost-efficient option in the long-run. This would be the best option as there are no batteries custom-made or embedded in them.

One of the major downsides is that there are very limited means for expansion online. Many offline versions don’t support online connectivity, and thus significantly hinders you from experiencing a brand new dimension for gaming where other consoles would allow you to. Moreover, the transactions and ways for you to purchase games are only done through the use of points—a process people may find cumbersome.

The war on consoles is one which has been going on for years. Having said that, there are several alternatives in the market for you. The desktop computer and even the Xbox Series has games that are equally entertaining as well. Furthermore, the Xbox Series has a system akin to the Motion Sensors, the Kinect, which has its own set of equally entertaining games as well.

Overall, the Wii is one of the most innovative consoles ever to be released in the market. Are you an avid Nintendo fan, or grew up playing all these Nintendo games?Would you want to revisit these games and feel a sense of nostalgia now and then?If you wish to take video games to a whole new level, then this is definitely one of the best options for you to choose.

Modern technology has indeed, been advancing and always developing through the years. Who would have thought that motion sensors and all these wireless devices could actually be used in digital gaming? Having said that, the Nintendo® Wii™ Console Black makes all of what used to be mere ideas into reality, and is indeed, a console that’s worth purchasing.