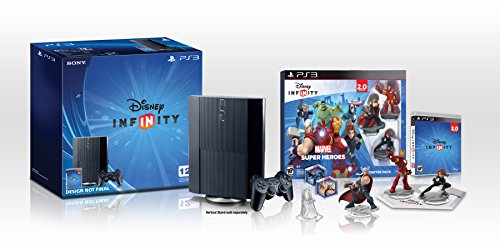 The PlayStation 3 might be an old chap, who debuted back in the year 2006, but Sony still manufactures the device due to its popularity, huge demand and overall available game titles compatible with the device. This was the era before the sales boom on Smartphones and tablets.

Even after a decade of seamless sales and service records worldwide, the PlayStation 3 is still going strong among the current generation of consoles that offers jaw dropping graphics and technologically superior features and specifications.

This is due to the fact that this is a great little piece of machinery that offers great performance at a reasonable price. The PlayStation 3] could prove to be a great companion for the one who is new to the console gaming arena.

Added with the fact that this has been in the market for a long time, and is still in production, opting for the device is a smart choice as one can enjoy the plethora of game titles available for the PS 3 platform.

Being a technology of the yesteryears most of the features and specifications along with the user interface offered by the device is similar to that of the current and advanced generation of PlayStation.

So it won’t be a matter of frowns when your tech savvy friend, who owns a PS 4, comes over for a session in Mortal Kombat! The features of the console are discussed in detail below.

Since the product has been in existence for more than a decade, the PlayStation 3 boasts a huge collection of gaming titles of both blockbuster franchises such as the Call Of Duty series, Gears Of War series.

Not only the console is catered with third party titles, but PlayStation 3 exclusive titles are also developed over the years such as the PS 3 versions of Grand Theft Auto 5, Last of Us etc.

Online play at no extra cost

Accessing the online features of the PlayStation Network has never been so easy. The best part, all of the online fun is available to the user at zero fees and service charge. Simply connecting your PS 3 console to the internet via a wireless or Ethernet connection is enabling the gamer to enjoy his console’s features to the fullest.

Streaming apps such as Hulu Plus, Netflix etc can be downloaded and used as per your requirement with no extra fees. The streaming services of the apps can be enjoyed by simply signing up for their subscriptions for getting instant access to their content.

The inbuilt Blu-ray disc drive is capable of playing media from Blu-ray discs. Watching high definition movies and series in high definition, with life like visuals and colors combined with great sound quality has never been so easy.

The product package includes a single, Bluetooth DualShock 3 gamepad. The same connects wirelessly with the console via the BlueTooth interface and can be charged via a micro-USB cable supplied in the package.

The PS 3 is modestly equipped with a processor and graphics solution, the likes of which includes the Power PC Cell microprocessor, 256 MB of RAM and a dedicated graphics processing unit sourced from NVIDIA RSX series of graphics cards.

These are not at all impressive components if one compares the PS 3 with the likes of consoles available in the market today. But the PS 3 makes the most out of its available resources for the list of available titles at its disposal in the PlayStation library.

The front of the console boasts USB 2.0 ports, which has plenty of usage in terms of charging the wireless controllers via the micro-USB cable, or for connecting USB flash drives and other related storage peripherals.

The back of the console hosts a plethora of connectivity options that consists of the power switch, the LAN and HDMI ports, the digital audio output jacks and RCA/AV output sources. The built-in Wi-Fi adapter enables the console to connect to the internet wirelessly and also via the Ethernet connection port.

While most of the people of this generation opt for the newer versions of the PlayStation series, many who are familiar with the PS 3 series of console still recommend this console to others due to the fact that the PS 3 is far more affordable than the rest available in the market.

The huge collection of PS 3 compatible game titles and also the upcoming ones specially down scaled for seamless performance and compatibility with the PS 3 hardware makes this a compelling and appealing product to the ones who are on a tight budget.

How does the product serve your needs?

Similar to the bulky predecessors, the trimmed out and sleek PS3 12 GB edition is a catchy, ad pretty useful device both in terms of a gaming and Blu-ray media playing device.

Though the hardware equipped with this device is not sufficient enough for running the present day game titles, it is still a decent performer in running the titles that are a few years old.

How is the product different from that of its competitors?

There are many competitors of the PlayStation series, in this case, the ones competing against this one is its own siblings.

This product is highly recommended as a secondary gaming console, to the hardcore gamer, and also to the one who is new to the console gaming arena and doesn’t want to invest a lot in a device that he or she is unfamiliar with

If one compares the PlayStation 3 with the 500 GB SATA version then the fact that really pops its head out is the pricing.

Though the SSD version is offering you faster reading and loading options, do you really want to opt for a reduced capacity device or a device with more storage but less reading speed? The answer to the question determines the outcome. All in all, this is a reliable and decent gaming console at an affordable range.