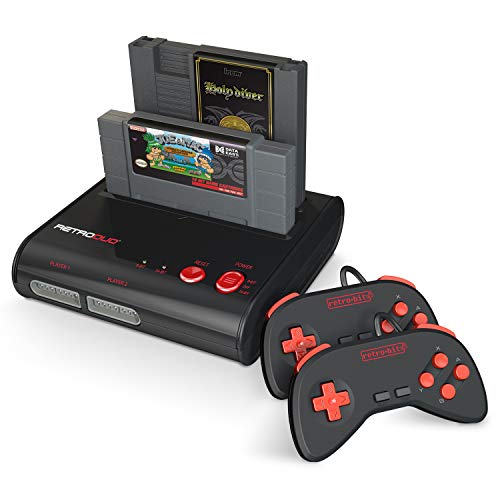 Retro games seem to be making a comeback, despite the high definition multiplayer games that are available with the newest technology.  One of the newest gaming consoles that have lots of retro games available on it is called the Retro Bit Generations.

At first glance the Retro-Bit Generations just looks like a glossy black box adorned with two USB controller ports on the front, a power button on the top, SD card slots for saving game states, the HDMI output and of course the power cable.

The system also comes with two controllers that feature 9 foot cables and appear to be modeled after the six-button Sega Genesis controller; with a directional pad, start button, and two rows of 3 buttons as the action keys.

The Retro-bit Generations is loaded with over 100 different games from Capcom, Data East, Irem, and Jaleco, varying between 8- and 16- bit systems from either Nintendo or Sega. Some of the known games included with this system are Bionic Commando, Gun.Smoke, Mega Man, Street Fighter, Bases loaded, and many more.

Other than the much-known classic games that appear, a lot of the other titles are generic or have attempted to take a modern game and make it into an 8-bit nightmare. Such as Creepy Bird, which is an attempt at a retro style Flappy Bird.

Even though these games are featured as 8- or 16- bit, they come in a lot crisper than the original retro games. Because the Retro-Bit Generations uses an HDMI output the display for some games look clear and bright.

Unfortunately, this also means that some games will have the appearance of looking fuzzy due to the fact that the pixels are attempting to be larger in size to fix the screen.

If you are an avid retro-gamer and enjoy playing from an odd shaped controller, the Retro-Bit Generations may be the gaming console for you. With two controllers and over 100 classic games you can enjoy, this device can keep you busy for hours.

While the Retro-Bit includes many beloved titles, the majority of the games are unknown and mediocre, which leaves the advertisement for over 100 games a little less to be desired. Plus, Retro-Bit Generations took modern games and attempted to make them look like the old classics, which did not work very well with dedicated gamers or fans.

With an HDMI output, you would expect to have a clear, crisp display, but because the makers of Retro-Bit Generations loaded the games onto this device without enlarging the pixels, some games appear fuzzy or blotchy, not looking much better than the analog video connections on the originals.

The controllers featured with this device has a long 9-foot cable, which is great when you do not have a wireless option. But that is about the only good thing about these controllers. The buttons feel still and unresponsive, making it hard to successfully play any of the games featured.

The Retro-Bit Generations is only one of the gaming devices that has brought back retro gaming to gamers’ living rooms. Nintendo also released a modern version of their retro Nintendo system, called the NES Classic.

This system has better graphics because Nintendo managed to blow up the pixels to get them to look more crisp over HDMI output. It also features a lot more of the beloved Nintendo games without clogging the system with crappy unknown titles.

While the Retro-bit Generations system is inexpensive in comparison to the NES Classic, it is not necessarily worth the value.

Sure, you can find many games that will be fun and bring back fond memories, but the lack of clear graphics, and the unresponsive controllers help determine that this is not the best modern, retro gaming system out there.