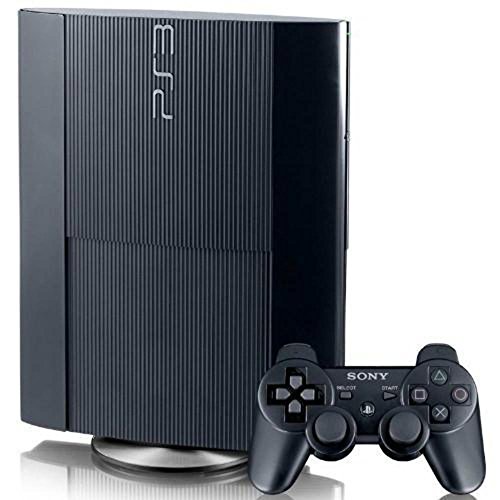 The PlayStation 3 was released in 2009 around the same time as the Xbox 360 and the Nintendo Wii. Featured as Sony’s upgrade from the PlayStation 2, it is a slimmer style and has the option to stand vertically or lie down horizontally to fit into any AV rack.

A clever design on Sony’s behalf was giving the PS3 a curved top to deter people from stacking other systems or items on top of the device which can cause it to overheat.

The nice feature to the Sony PlayStation 3 compared to other gaming devices is that it does not require an external power supply, meaning that the cord that runs from the back of the console goes right into the wall without a massive brick like power supply.

The Sixaxis Dual Shock 3 controller designed for the PS3 is almost identical to the original PlayStation controllers. You can find the dual analog joy sticks, as well as the X, Y, A and B action buttons and the directional button pad.

The main difference is that these controllers are wireless using a built-in Bluetooth technology the controllers can reach up to a 20-meter range. And to charge the controllers you just plug them into the USB ports that are located on the front of the console.

While you are able to hook up 7 wireless controllers to the gaming device, only two USB ports are on the front of the device, which can make charging your controllers a little tedious. But to make up for the lack of ports, Sony claims that each charge will guarantee you about 30 hours of gameplay before needing to recharge.

Diving into the consoles hard drive, the PS3 comes with either 80GB or 160 GB which is a relief since the PS3 does not have memory card readers. But it does allow you to play DVDs and Blu-Ray videos, plus users have Wi-Fi connection allowing them to access digital media and streaming sites to watch videos such as Netflix and YouTube.

And since Wi-Fi is available on the PS3, PlayStation has launched a PlayStation network for online gaming similar to Xbox live, but logging into it is free.

If you love your classic PS2 games but want a great upgrade to a new PlayStation system, the PS3 is the way to go.

With the launch of the PS3 came the launch on PlayStation Online gaming network, but still in the works, there are many issues with the online gaming community that still needs the bugs worked out in. Also, the ability to play PlayStation 2 and 3 games, plus stream videos online, the PlayStation 3 is a huge upgrade from the PS2.

Although there are some features that are less to be desired like the fact that there are no memory cards or external hard drives to keep games, downloads, and information on, there are two different versions of the PS3 with different size hard drives available.

The PlayStation 3 also plays all games and videos in high definition providing a clear and bright gaming experience. With Bluetooth technology, you are able to use high quality Bluetooth gaming headsets and can hook up to seven wireless controllers to the console device.

While most wireless controllers have removeable batteries the PS3 controllers do not, but they are rechargeable and each charge should last about 30 gaming hours. Eventually though the battery will die for good and instead of replacing the battery you will have to replace the whole controller which can be a little pricier.