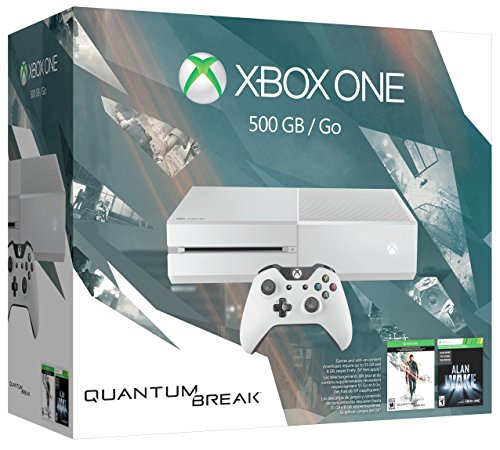 The gaming console as well as its controller comes in a limited color of Cirrus White, even though Microsoft says that people can also avail the Quantum Break bundle in a black hardware.

Inside the box of the Xbox One Quantum Break bundle, you will get a 500GB hard drive model of Xbox One, one full-game digital downloadable copy of Quantum Break, and one code to download Alan Wake, the previous title of developer Remedy Entertainment.

Plus, you will get the wireless controller of Xbox One with a 3.5mm headset jack, which you can plug into any compatible headset. You also receive a 14-day trial of Xbox Live Gold, an HDMI cable, and AC power cable.

Moreover, the redeemable download offered for Alan Wake comes with the original Xbox 360 game, which can be played through the backwards compatibility feature of Xbox One, in addition to the title’s The Writer and The Signal DLC game releases.

With the Xbox One Quantum Break gaming console, you can play your digital Xbox 360 and disc-based titles with advanced features, such as in-home streaming to Windows 10 and game DVR. Plus, you can quickly switch between live TV, your games, and apps such as Amazon Video, YouTube, Netflix, HBO GO, etc.

You can also enjoy the squad of greatest games with titles such as Rise of the Tomb Raider, ReCore, and Halo 5: Guardians.

You can get multiplayer invites as you watch live television, Blu-ray movies, and Amazon Instant Video. The Xbox One special edition also includes Sling TV, Skype, and other such popular apps like NFL and ESPN.

You also get OneGuide, which is a personalized entertainment guide across apps, live TV, and much more.

You can avail this special edition of Xbox One White Color gaming console at $259.78 from Amazon. When you buy the Xbox One Quantum Break edition, you receive the original Alan Wake as well as its DLCs in the gaming console bundle.

Moreover, when people pre-ordered this special edition Xbox One, they also got the quasi-sequel for the Xbox 360, that is Alan Wake’s American Nightmare.

The game of Quantum Break is about the heroes and the show is about the villains, which shows that it comes in a combination of a TV show as well as a game. Made by Remedy Entertainment, a Helsinki-based group that also created Max Payne, this hero game is offered in the new Xbox One special edition version.

The CEO of Remedy Entertainment, Matias Myllyrinne, told BBC that the heroes in this game are in the middle of an awful accident, in addition to a university initiative gone dreadfully wrong while time begins to break down.

The main characters in the Quantum Break game gain powers in order to manipulate time. Through this gaming console, you can experience a suspenseful storyline and time-amplified action, where time is the greatest weapon of the user and their choices influence the enthralling live action show.

About the Xbox One White Console

On the other hand, the complete right side of the console’s top has a huge vent, which is made using matte white plastic. When you view this system from one angle, you can notice a dark, big circular area in the vent from where the heat in reality leaves from the system’s inside. This thing is not noticed in Xbox One’s all-black model.

Then, the front side of the console comes, which has glossy plastic on the right side and matte white plastic on the left side. It looks somewhat of a checkerboard pattern, when you see both the top as well as the front parts of the console simultaneously, with the alternating matte and glossy parts rather than continued ones from top to front.

Although, capacitive buttons have good technology, they are worse when it comes to their functioning since they are more often pressed mistakenly.

The console’s left side has white color plastic around the edges, but the major part is covered with black covered vents. The primary USB 3.0 of the system is close to the side’s front, in addition to the Sync button. Moreover, the right side of the system has a big black color vent.

You will love to play this game on this game console, which especially features the Quantum Break game.