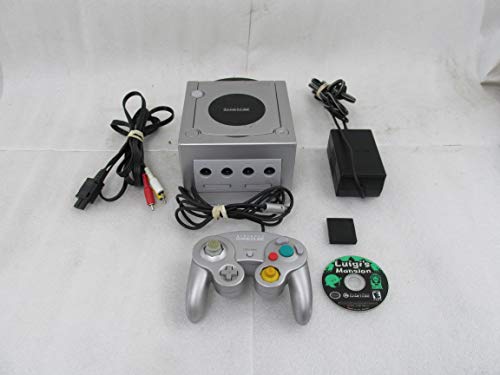 Nintendo released a limited-edition platinum Game Cube. It is the next generation and upgrade version of the much-loved Game Cube gaming device. But this Platinum edition has a 485MHz processor that provides quick game loading and clear graphics.

Nintendo dedicated the Game Cube to specifically play only games and nothing else. While this is Nintendo’s first gaming device that plays discs instead of tiles, you cannot use the system to play movies or CDs. Nor does the Game Cube Platinum allow you to access the internet to check social media or stream videos.

Since the Game Cube Platinum is only dedicated to be able to play video games Nintendo put a lot of work into creating the best gaming system.

The graphics alone is 162MHz and 24-bit color pixels to create clear and right colored pictures for the best gaming experience. The gaming system alone has 40MB of memory plus it comes with two memory card slots for an additional external hard drive.

Nintendo Game Cube Platinum has many new games that are available to play, plus the infamous Nintendo games such as Mario, Zelda, Kirby, Perfect Dark, Metroid, and Pokémon.

In addition to the classic Nintendo games the GameCube Platinum paired up with some third-party gaming such as Madden, Tony Hawk, Sonic, Star Wars, and Batman.

The Game Cube Platinum has four controller ports for multiplayer games, plus it is compatible with the wire Game Cube controller called the Wave Bird.

Other than the option to use the Wave Bird controller, the controllers are the same odd shaped controllers used for the Game Cube with two analog joy sticks, a directional keypad and four multi-shaped and sized action buttons, with a start button positioned in the center of the controller.

It is designed with a handle to make it easier to transport friends’ houses or to take on vacation so you can enjoy the games of the Game Cube Platinum anywhere with ease. Also, the console is only 6 pounds and although not actually shaped as a cube, it is about 9x9x6inches making it incredibly compatible.

Other than being a limited-edition Game Cube, the Game Cube Platinum does not prove to be an upgraded or different version than the original Game Cube.

Another factor that the Game Cube Platinum has is that you are able to use the Wave Bird wireless controller. The wireless controller can be used within a 20-foot radius, but no further away or it will cause glitches and transmitting issues.

If you are a Nintendo game collector the Game Cube Platinum limited edition console is a good gaming device to purchase. It comes in a trendier style with a silver color, while the original Game Cube was designed in a blue-green color.

Personally, the Game Cube Platinum is not something to buy thinking that it is an upgrade form the original Game Cube since it can play all the same games and has all of the same features. If you do not already own a Game Cube it is nice to purchase the newest one on the market.

Although the Game Cube Platinum will cost a little more than the original Game Cube, it will cost nowhere near the price of other gaming devices that are on the market. Especially since it does not have internet access or can be used as a multimedia device.